Li-Fi technology: What it is and how it can revolutionize mobile communications

Today’s mobile terminals are powerful communication centers that connect to the Internet in multiple ways through technologies such as 3G, 4G or WiFi . However, there are times when these systems are easily saturated, such as in places with large crowds of people, and it would be good to have a complementary or even more personal system. 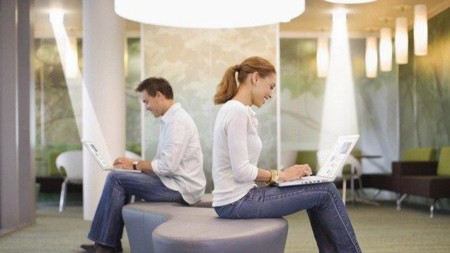 Li-Fi is the popular name for an optical communications technology that has been researched for more than 100 years and consists of transmitting data at frequencies between 400 and 800 THz (that is, in the visible spectrum of humans) in open space.

It aims to be able to transmit information with conventional lighting elements (LED bulbs) at the same time that a room is illuminated, and by adding only a few cheap and easy-to-manufacture elements to current light bulbs.

Basically you need a modulator in the transmitting part that will turn the light bulb off and on very quickly (imperceptible to humans), thus creating the binary ones and zeros, and a photodiode in the receiving part (for example in the mobile ) that picks up the light changes and passes them back to the electrical domain.

The first versions used fluorescent lamps with which speeds of a few Kbps were reached. Later, LEDs began to be used, capable of turning on and off faster, with more power, multiplying the final speeds. But it wasn’t until Professor Harald Haas of the University of Edinburgh showed off the first device he called Li-Fi transmitting at 10 Mbps in 2011 that we began to see the true potential of the technology.

Haas then pointed out that in a short time it would be possible to increase the speed up to 500 Mbps (supposedly what was considered the physical limit of this technology). Subsequently, the Fraunhofer Institute in Berlin showed their progress and indicated that they could reach 800 Mbps . And the research continues with proposals that want to reach 15 Gbps (1.88 GBps) as they optimize the operation of both the sending and receiving parts.

What can these Li-Fi communications be used for? Well, mainly to transmit high-speed data while lighting up a room. Li-Fi has numerous advantages. To begin with, it does not saturate the part of the spectrum currently used by other systems such as WiFi in its different versions, since it uses visible light.

The information arrives through the beam of light from the LEDs, with which we can either create a scattered beam that provides wide coverage or a very fine beam that illuminates small regions and transmits data in a more directional way. This allows greater control over who the data is reaching at any given time and allows for more secure short-range networks.

It can also be used to transmit large volumes of data between computers or to multimedia devices. For example, we can quickly send a video from the mobile to a television or copy it to a network hard drive just by pointing the phone at the TV or the hard drive for a few seconds, as we now do with the remote control to change the channel (which also uses an infrared-based “Li-Fi” variant, by the way).

However, not all benefits. The main drawback of the technology is its reduced range , which at the moment is only a few meters (typically about 10) and that the coverage is cut off when an object gets in the light beam . All you have to do is pass your hand through the beam of light or move the terminal away from it so that the transmission is cut off, as you can see in the following video:

The smartphone, a great receiver for Li-Fi

Although Li-Fi technology can be applied to any fixed and mobile communications device, it is in the smartphone where you can find great potential, both inside and outside the home. Inside because it allows simple, powerful and theoretically cheap networks that can reach every corner of a room by means of a light bulb in the ceiling .

And outside because they are a great option to deploy ad-hoc information systems without using WiFi , with personalized information that will arrive directly to our terminals. For example, a few days ago we told you about an alternative to QR codes that could use this visible light technology to bring information to mobile phones.

But they are already thinking of installing Li-Fi in places with a large influx of people , such as libraries, museums, sports stadiums, shopping malls, etc. For example, imagine the typical case that we go shopping and when we pass through a corridor, under a light that apparently is normal, or next to a specific product we receive a mobile alert that it is on sale.

Or if we want to know more details about its characteristics and operation, simply by being under the light that illuminates it, we can enter its technical data sheet and watch demonstration videos of the product. But in addition, Li-Fi can be used in elements of urban furniture , such as lampposts, canopies, etc. and as an advertising system in neighborhood businesses.

Of course, for all this to be possible, it is necessary for mobile phones to have reception systems for this LED light, preferably installed on the front of the terminals. Companies like Oledcomm and Sunpartner are already working on it and it seems that they have ready a terminal prototype presented last fall and whose basic operation you can see in the following video:

Li-Fi is, therefore, an interesting technology with a lot of potential for the future that we will probably begin to see insistently as of 2015. It is cheap, fast, relatively simple , does not saturate the usual electromagnetic spectrum and promises high transmission speeds with little battery consumption . Come on, the Holy Grail of short-distance mobile communications.

Remove Dust and Water from Your Cell Phone with These Tips